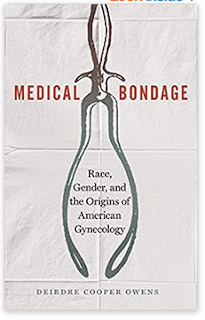 When I first heard about the book  Medical Bondage - Race, Gender, and the Origins of American Gynecology by Deidre Cooper Owens I added it to my Goodreads list.  I borrowed a copy and finished reading it a few days ago. I highly recommend this book.  It is not an easy book to read. It will make you feel uncomfortable but it is important to understand the issues Black women had in the past being treated and experimented on without any say as to how and what was being done. There was no consent given although in 1833 Beaumont wrote that "consent of the subject is necessary".

The accomplishments of Drs. Mettauer, Sims, Bozeman and others are well known but the fact that  their work was done on women who were poor ,vulnerable, enslaved women or  poor "Blackish" women, such as female Irish immigrants has only been discussed during the past few years.  While women during the 19th century were thought to be "inferior",  Black women were thought to have enhanced reproductive successes and could endure more pain. Scientific racism existed as procedures were done on enslaved women whose owners allowed the procedures or were leased to doctors,  in order to learn how to treat similar conditions in White women.

As I read the book  I thought of the pain I experienced after surgery for ovarian cancer even with access to  pain medications. Imagine going through procedures like ovary removal or fistula repair without being asked, without anesthesia and unclothed. How could the physicians like Sims write about his patient, Lucy, being in agony after a procedure and still think Black women were impervious to pain? I urge you to  read this book.

I gave this book 4 stars.

Dee
Every day is a Blessing!
Posted by Dee at 10:44 AM No comments: