Going Back to Before my New New Normal

This past weekend I went back to a place that I haven't been since my new new normal began in 2009. Along with my cousin and her family we drove up to the Pocono's for our stay at Woodloch Resorts. This was our 19th visit to Woodloch,  a Kiesandahl Family business since 1958. We've been going around President's Day since my kids were small and the resort was known as Woodloch Pines. It has grown over the years and from what we hear will continue to bring us good family fun for years to come.

This weekend was like going to visit an old family friend. We had the same rooms we've had for years. Our  rooms are close to the indoor swimming pool and the resort is on a lake so the view from our room is just so pretty.

What is a weekend at Woodloch is like? The best way to describe it is as a cruise on land. There was lots of good food, and activities ( swimming,  snow tube runs, zumba,  and games like Family Feud andSmart Alec).

On Saturday night we enjoyed a night club show "All Things Italian", a comedian and the music of Sam, and "The Company". We've been enjoying the music of Sam since our first visit so when he hosted one of the games we played on Sunday we were able to chat about his music and how much we have enjoyed it. In addition to Sam we caught up with some of our favorite Woodloch people- John Kiesendahl (owner of Woodloch) and his famous decorated slacks, Kathy who originally was our waitress and now works at the front desk, DJ Luis who has been hosting lots of dance and karaoke nights and Randy and his hysterical costumes.

This year even though there was internet access I didn't bring a computer. It was nice to just enjoy spending time with Nick and my cousins doing things that made us laugh.  I did have some issues following along during my first ever Zumba class and the neuropathy in my toes did act up a bit but I really didn't think much about cancer the entire trip. How refreshing!

But now it is back to my advocacy work prepping for next weeks e-Pharma Conference panel discussion.

Dee
Every Day is a Blessing ! This past weekend was a blessing of old friends and family.
Posted by Dee at 4:17 PM 1 comment:

For the holidays I finished a landscape painting of Artist Point for my son and a portrait of my dog trainer's pet a Golden Retriever named Bling. So I decided to go back to painting quilt patterns and add to my Life Quilt series. 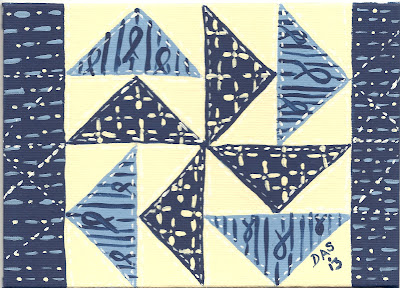 The fourth in the series, Determination is a star pattern.I am not sure of the specific name of the design.  This quilt piece is to honor those diagnosed with colon cancer so I decided to use dark blue the awareness color for colon cancer.

I picked up a new book of quilt patterns at a sale at the Cranbury Bookworm bookstore and look forward to trying my hand at a few log cabin patterns.


Dee
Every Day is a Blessing!

Time Out For Teal

For my friends in the Philly area:

Time Out for Teal

February 24, 2013 at Anthony's Restaurant in Drexel Hill, PA
2 PM to 6 PM
This year’s event, held in memory of Margie Gormley Goodwin, will feature the live music of the bands LeCompt, Juliano Brothers, Girls Next Door Band, and Mike Maguire as well as DJ Tommy Tunes.  Attendees will enjoy great food from Anthony’s Restaurant, as well as the opportunity to participate in silent auction/raffle and 50/50’s.
Hosted by Brendan & Missy Dougherty
Tickets are $35 in advance and $40 at the door . Register for the Event Online Here

Help support the Tea Tea Foundation while having a delicious meal. Click on the photo below for more information about the February 24th fundraiser. 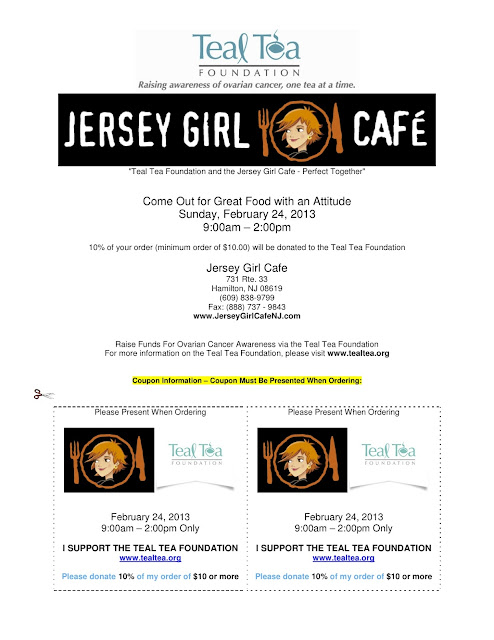 Dee
Every Day is a Blessing!
Posted by Dee at 2:56 PM No comments:

Playing Words with Friends ® is not only fun but may help with the "chemobrain" I have been experiencing.

That is just one of the many interesting things I learned last night during the program "Am I Just Forgetful or is it Chemobrain? A Discussion of Post-treatment Cognitive Changes" presented by Sheri Suozzo, RN at the Cancer Support Community -  Central New Jersey. Sheri is an oncology nurse and shared information available on the  Oncology Nurses Society website. Here are highlights from the talk and the handout she provided:


Although I am not thrilled that I am 3+ years out of treatment and still experiencing "chemobrain" , I am glad that cognitive impairment in cancer survivors is being recognizing and research to understand the mechanisms and treatment are taking place.


For further information please visit the these sites:

Earlier this week I read the online article "Breastfeeding reduces ovarian cancer risk by 91%". I had breastfeed my daughter so I was interested in more details about the study. So I searched for the actual breastfeeding study in the American Journal of Clinical Nutrition to learn more. Although I could not read the entire article I could read the abstract.

Just reading the title  Ovarian Cancer risk is reduced by prolonged lactation :a case controlled study in southern china hinted that the study might hold some surprises. I had wrongly assumed the study was done in Australia since the article I read reported the researchers were from Australia. There was no mention in the article that the study subjects were from  Guangzhou, Gunagdong Province in China.  Between August 2006 and July 2008  women were given a questionnaire and asked to recall how many months they breastfeed (lactated ) and how many children they breastfeed. The questionnaires were given to 493 women with ovarian cancer and 473 women in the control arm.  The mean age of the women was 59.

This study was a retrospective study. In these type of studies researchers ask participants to recall if they did or used something ( breastfeed, exercise, drink coffee, use a drug)  to determine if it was a factor in developing a disease or condition later in life. If you asked me today in 2013 how long I breastfeed my daughter back in 1982  I would not be able to give you an exact answer. Was it 6 months?  9 months? I don't think it was more than 12 months but I am not sure. So in this type of study patient recall can impact the results.

This study is interesting. But if we repeat the study in the US would we get the same results? The original article I read did not mention other studies to support the results of the Australian study but did note the benefit of  breastfeeding to lower their risk of ovarian cancer.

Well, I did some research and back in 2007 the study "Breastfeeding and risk of ovarian cancer in two prospective cohorts."was published.  The results are part of the Nurses Health Study  and was a prospective study. A prospective study starts out with a healthy population with certain characteristics ( like having breastfeed) and the subjects are followed over time to see if a particular disease develops. This study concluded that there was no significant reduction in risk of ovarian cancer  in women who ever breastfeed or  never breastfeed.  But women who breastfeed 18 months or longer did show a significant reduction in risk for epithelial ovarian cancer.The average length of breastfeeding in this study was 9 months.

I enjoy reading articles about cancer research studies and the related journal abstracts but sometimes find it frustrating that crucial details about the studies are often missing from media accounts.

Dee
Every Day is a Blessing !