I want to share with my readers two programs brought to you by the Cancer Support Community of Central NJ and Rutgers Cancer Institute of New Jersey . 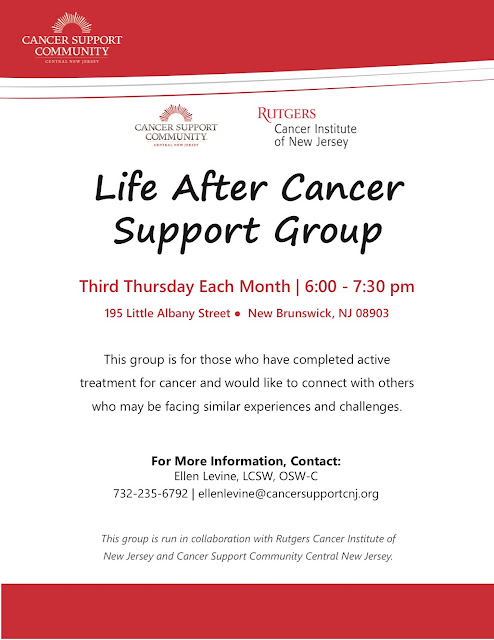 This other program being offered I took part in a few years ago when I finished treatment for my recurrence. I learned exercise techniques and nutritional tips during Cancer Transitions that I still use today. You should definitely consider joining the 6 week series. 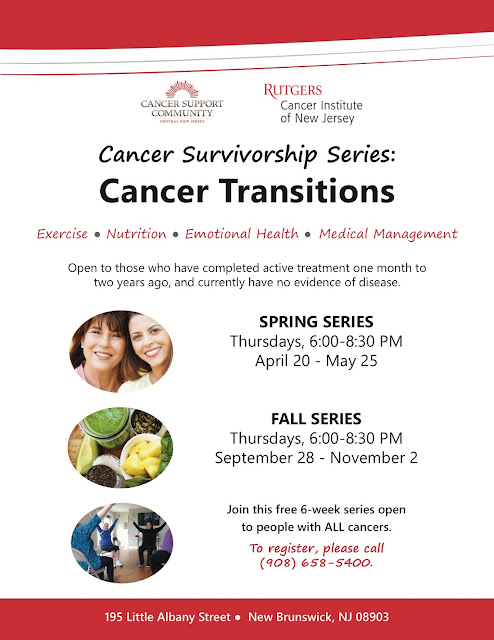 Dee
Every Day is a Blessing! Blessed that the needs of cancer survivors are being  addressed.

Today was the last day of The Society of Gynecologic Oncology (@SGO_org) Annual Meeting (#SGOmtg). Believe it or not as I type this the snow is falling again.

Here are some tweets I found interesting today.


A big shout out to all the researchers, gyn oncs, advocates  and others who tweeted from the meeting.Thanks!

I am at home watching the snow fall and following Tweets from The Society of Gynecologic Oncology (@SGO_org) Annual Meeting using the hashtag #SGOmtg.

Other sources of Meeting coverage:

Stay up to date on the #SGOMtg with our conference coverage! https://t.co/dzpWAtqAlW
— CURE Magazine (@cure_magazine) March 14, 2017

Motolimod is an agonist for TLR8 in GOG-3003. Combo with PLD in #ovariancancer had no improvement in OS or PFS. #SGOMtg
— Rebecca Previs (@BeccaPrevisMD) March 14, 2017

So thankful for a glimpse via tweets of research that can change the future of women with gynecologic cancers.

More news from the The Society of Gynecologic Oncology (@SGO_org) Annual Meeting. I am at home and have been following Tweets from the meeting using the hashtag #SGOmtg.

Here are some tweets I found of interest today-  Monday, March 13th.

ctDNA is the future of precision oncology for GYN patients and beyond! So many possibilities! #SGOMtg #endCancer
— Katie Kurnit (@katiekurnit) March 13, 2017


Slides from a Sunday presentation on  PARP


Thanks for all those tweeting from the meeting especially these folks

Dee Every Day is a Blessing!
Posted by Dee at 5:17 PM No comments:

The Society of Gynecologic Oncology (@SGO_org) is holding it's Annual Meeting March 12th -15th, 2017. I'm unable to attend in person, but I will be following hashtag #SGOmtg to catch the latest news and developments. My plan is to compile noteworthy tweets each day of the meeting and share those in a blog post.

Here are some tweets I found of interest today-  Sunday March 12th.

So thankful for the advocates, gyn oncs and researchers sharing what they learn via Twitter.

Dee
Everyday is a Blessing!

I wrote this blog post for the #gyncsm blog.  But I thought this topic is so important I needed to share it with my readers and others who may not be on Twitter.

The SGO (Society of Gynecologic Oncology) is conducting their Annual Meeting March 12-15, 2017. You can follow research presented at the meeting by following the hashtag #SGOMtg on Twitter. Note that we'll discuss SGO Meeting highlights during our April 12th #gyncsm chat.

During their annual meeting, SGO will be conducting a social media campaign to advocate for gynecologic cancer clinical trials. #gynscm is please to support this campaign and we hope you will join us.

There has been a steep decline in the number of clinical trials in gynecologic cancer since the restructuring of the NCI-sponsored cooperative groups in 2012.  Information about the campaign can be found in this SGO document. 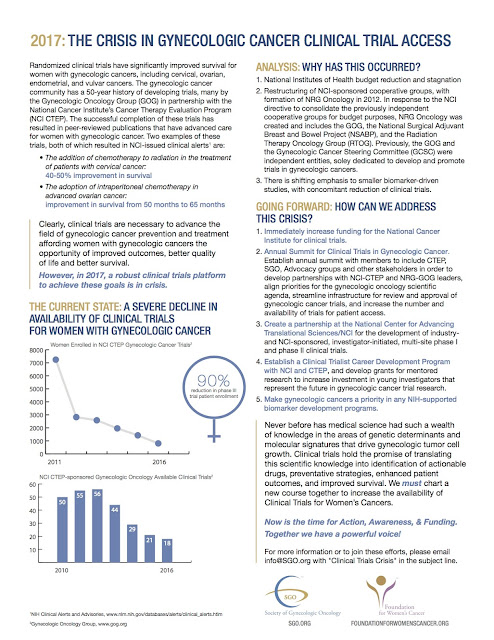 You can join us as #gyncsm supports this campaign by tweeting the following starting on Monday, March 13th at 9:35am EST:

The Threads of My Life 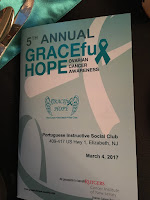 Graceful Hope was started by the Rocha family. Grace Rocha and her daughter Erika were both diagnosed with ovarian cancer and treated at Rutgers Cancer Institute of New Jersey,  were I was treated. Sadly Grace passed away in 2008 and Erika, initially diagnosed at the age of 16,  passed away in 2011.

I first met the Rocha family in 2012 when they asked me to share my survivor story at the 2nd Benefit. This past weekend I was once again honored to speak at the 5th Annual Graceful Hope Benefit for Ovarian Cancer Research. This year the funds raised were being presented to Rutgers Cancer Institute of NJ.

Here are portions of my speech - The Threads of My Life.