July 29,2005 was not such a great day for me. I awoke from surgery and learned I had stage IIIB ovarian cancer. My doctor said I shouldn’t read any of the statistics. They are just numbers, she said. Did I listen? No. When I got home from the hospital I went on to the NCI website and I read the stats . Not so good. The overall five-year relative survival rate for ovarian cancer is 46% but for late stage (that was me) it drops to roughly 30%. Not such a great number.

My husband was my rock. When I thought it was too tough to continue he would say just take it one day at a time and you’ll be done before you know it. So after nine cycles of carbo/taxol /selenium over a 7 month period, I was done. Life slowly returned to a new normal. Over the next few years I visited my son in Switzerland where he spent a semester abroad, I watched him graduate college and saw my daughter marry a marvelous man.

Then in October 2008 my CT scan showed lesions on my spleen and liver. Darn that was not good. I thought to myself maybe those stats would be right. But once again my CINJ gyn oncs went to work. They referred me to Dr. Chris Gannon , a CINJ surgical oncologist. He removed my spleen and did a liver resection. I followed that up with six cycles of chemo and the cancer was gone. Again. And it still is.

So tomorrow I get to celebrate my fifth "cancerversary". The heck with those statistics.

As a way to celebrate this milestone and to honor my CINJ Doctors and nurses, I am walking in the High Speed Chase for the Cure benefiting CINJ on Sunday September 12, 2010. I’ve formed a team. My daughter suggested the name - High Five. Makes sense – ‘cause I’m celebrating five years as a cancer survivor. Want to join my team? You can walk, be a virtual walker, run or just make a donation for what I think is a very worthy cause- my lifesavers at CINJ.

Every Day is a Blessing !

PS( Thanks to http://www.brightestyoungthings.com/featured/its-national-high-five-day/ for the photo above.)

On Sunday, October 3 the Cooper Foundation will host the
Pink Roses Teal Magnolia’s Brunch to benefit Cooper Cancer Institute.
The event will be held at the Crowne Plaza, Cherry Hill, NJ

This event gives local breast and gynecologic cancer survivors an opportunity to celebrate with their family and friends and show support for the important work done at Cooper Cancer Institute.

Check the site above for info on how to register or if you want to be a sponsor of the event.

The United States of TEAL

OCNA has a new program called United States of Teal. The goal is take the fight against ovarian cancer to all 50 states. The state legislators are asked to take a pledge and try to do some simple things such as wear teal, write about ovarian cancer, or submit a statement into the record. Survivors and caregivers can help get their state teal by following the steps given on the website by clicking on Take Action. Let's do it NJ!

Check out how TEAL the country looks here. I hope by September - Ovarian Cancer Awareness Month in the US that the entire country will be teal.

Do you use Glad Press n' Seal in the kitchen? I do and I am very impressed. But there is more.

A few days ago I was reading through some posts on the OCNA Support Community (Inspire) regarding the use of lidocaine ( Emla) cream on ports before they are accessed. One women wrote how she uses Glad Press 'n Seal to cover the cream - instead of a band-aid or gauze and paper tape. So I figured what the heck I would try it.

Today was my port flush day at CINJ. My port was inserted back in 2005 when I first had intravenous chemo. Accessing my veins in my arms is very difficult so it was decided that I have a Port-A-Cath® inserted in my chest. The photo above shows an example of different ports ( I have to get my double port flushed every 6-8 weeks so it can function correctly and the lines don't get blocked.) So this morning Nick applied lidocaine cream to the skin that covers my port and then we placed a piece of Glad Press 'n Seal on top. And it stuck . And stayed in place without causing any pinkness - like the band aids sometimes do. My body doesn't really like the adhesive they have on bandages.

So there you go - another good reason to buy Glad Press 'n Seal!

New Ovarian cancer data was released by the NCI.

Dee
Every Day is a Blessing!
Posted by Dee at 11:00 AM No comments:

WHAT: Virtual Advocacy Day for the Ovarian Cancer Community
WHEN: Today, Tuesday, July 13, 2010 (to coincide with Advocacy Day at the Power is Teal Conference)
WHY: Participating in the Ovarian Cancer National Alliance's Virtual Advocacy Day is as easy as sending an email or picking up the phone and can make such a difference for the ovarian cancer community.
Today, 110 members of the ovarian cancer community are on Capitol Hill advocating for Congressional action that will make progress against ovarian cancer. You, too, can be an advocate by contacting your elected officials to express your desire for them to support legislation and appropriations essential to fighting ovarian cancer.

What we are requesting from Congress falls into three major categories:
a) increased funding for ovarian cancer research and awareness efforts,
b) co-sponsorship of Johanna's Law if they are not already co-sponsors, and
c) co-sponsorship of the Ovarian Cancer Awareness Month resolution.

Follow these simple steps to get involved in the fight:
1. Send an email: click here to send a message to your Representative and Senators.

2. Make a phone call: click here and enter your zip code to find the contact information of your Senators and Member of Congress.
When calling, please follow the directions and script below:
Ask to speak to the person who handles health issues related to cancer. This person will usually be referred to as the "Health L.A." (L.A. stands for Legislative Assistant).

Once the Health L.A. is on the phone, state your name, the city or town in which you live and make sure to mention that you are a constituent. Next, briefly describe your connection to ovarian cancer.
Here are your talking points for what we are requesting:

Last step: Thank them for their time and ask the Health LA to let you know when your elected official has taken the actions requested.

Please note: If the Health L.A. asks you any questions you cannot answer, please direct them to the Ovarian Cancer National Alliance at (202)331-1332, and please email the question to action@ovariancancer.org.
Thank you for helping us make a difference in the future of ovarian cancer!

Dee
Every Day is a Blessing!
Posted by Dee at 2:42 PM No comments:

I updated the local events page on this blog. There are lots of ways to help raise awareness for ovarian cancer and funds for research in the next few months in New Jersey- walks, dinners,baseball games, ribbons, etc. I've also listed an event a friend has organized in November that will raise funds for the Cancer Institute of NJ and its Gynecological Oncology Department ( My life-savers.) . Check out all the events here or click on the Local Events tab above.

This weekend is the OCNA conference in DC. I am unable to attend. I hope to make it in the future and meet up with so many other advocates from all over the country. If I hear any interesting tidbits I will be sure to pass them on.

Dee
Every Day is a Blessing.
Posted by Dee at 10:30 AM No comments:

Results of an interesting study by a team of scientists at the University College of London was recently published. They found that the expression of a gene - EPB41L3- was found to suppress ovarian cancer cells.
Read a summary here.
Dee
Every Day is a Blessing
Posted by Dee at 10:58 AM No comments: 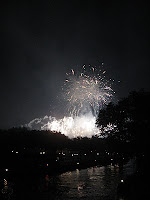 "We, therefore, the representatives of the United States of America, in General Congress, assembled, appealing to the Supreme Judge of the world for the rectitude of our intentions, do, in the name, and by the authority of the good people of these colonies, solemnly publish and declare, that these united colonies are, and of right ought to be free and independent states;... and that as free and independent states, they have full power to levy war, conclude peace, contract alliances, establish commerce, and to do all other acts and things which independent states may of right do. And for the support of this declaration, with a firm reliance on the protection of Divine Providence, we mutually pledge to each other our lives, our fortunes and our sacred honor. "
Declaration of Independence

Dee
Every Day is a Blessing!
Posted by Dee at 11:02 AM No comments: